Sgt. 1st Class Cedric Crumbley is the author "Proven Sales and Recruiting Methods, an Army Recruiter's Guide to Selling Anything to Anyone. 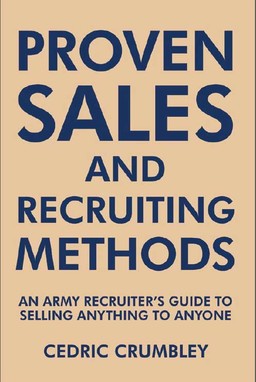 From Recruiting Failure to Success, Recruiter Now an Author

When Sgt. 1st Class Cedric Crumbley was detailed to recruiting in November 2001, he hated it so much he tried to kill himself.

Driving through one of the most dangerous parts of Houston one night, he intentionally ran three red lights hoping someone would slam into the side of his 1996 truck and put him out of his misery.  It didn’t work. There was no accident.  He sustained no injuries, not even a scratch.

“Not only was I a terrible recruiter, but I couldn’t even kill myself,” Crumbley said.

Still struggling three months after his arrival, he confessed to his center leader one day he just couldn’t sell, naively hoping that admission would prompt his commander to send him back to his old unit.

Instead, Crumbley was told, “Well, you better learn to sell because you’re not going anywhere.”

Faced with threats of demotion, Crumbley decided if he couldn’t get out of recruiting or kill himself, he would become a great recruiter.

He started reading every book about selling he could get his hands on. He implemented the authors’ techniques and devised some of he own, eventually becoming one of the top producers in his station, collecting production awards.

Now Crumbley has written a book, “Proven Sales and Recruiting Methods, an Army Recruiter’s Guide to Selling Anything to Anyone.”

Now on the 3rd Medical Recruiting battalion S3 staff, Crumbley  talks about how he raised himself from failure to success, offering some proven techniques for putting people in the Army and enhancing your life.


Q.  What are some tips and techniques and best advice you can give to your fellow recruiters on how to sell anything to anybody?
A. Tip #1   One of the best tips can be found in this saying, "If you want to know what John Smith buys, you must see the world through John Smith's eyes."  Do your homework. Get to know your prospects better than they know themselves.

Tip #3   Listen to your prospect before you start selling. Let them share their hot buttons with you. If you listen closely they will lead themselves into buying.

Tip #4   Ask yourself, "What are we really selling here?" Remember, your prospect is buying joy, satisfaction, desire, and emotional fulfillment. People buy with emotion and justify with logic. Sell emotional benefits to your prospect. Don't sell what your product is.

Example: "You should join the Army." Sell what your product (the Army) does for the prospect.

Example: "You're upset with your boss. He never shows you any respect. Don't you want to get away for awhile? I mean, just check out some options where you'll get a little more respect than you are right now." - In this example we are selling the respect a person can get by joining the Army. I put someone in the Army off of that one.

Tip #5   Cut your losses. Trim the fat. The top producers are always looking for ways to trim down their funnel, not add to it. The result is often more quality applicants, which leads to more contracts. Disqualify leads who don't belong on your processing list and focus on the best qualified. Ask the hard questions to your prospects. The more people you disqualify, the more time you can spend with quality applicants.

​Often times disqualifying a prospect will cause them to want to join even more. People want what they can't have. Ask, "Are you good enough?" Figure out where to get the biggest bang for your buck. Once you have a realistic view of your funnel, you will know how much time to spend prospecting.

Q.   What would you tell recruiters who are struggling, what's the most important piece of advice you can give them?
A.   Don't give up. Believe in yourself. Practice, practice, practice. Read all the books you can get your hands on. Here's a tip few people will take but it will make the most difference. Turn your car into automobile university. Instead of listening to the radio start listening to audiobooks. Listen to Tony Robbins, Zig Ziglar, Brian Tracy, Les Brown, Jim Rohn, Earl Nightengale, and others. Build value in yourself and people will beat a path to your door. I'm a living witness. The future is in your hands.

Q.    What other advice can you offer?
A.   Get a mentor. Even if you have to pay for a mentor, it's worth it. When I ran track, I had a coach that taught me how to do the high jump. I went all the way to the national championships. I would have never gotten there without a coach. You need a coach if you want to go further than where you are now.

Q.   How did these steps change your job and life?
A.   Recruiting helped me find my passion for selling. I learned to make money outside the Army using the same skills it takes to recruit people into the military.  Listen, USAREC has equipped recruiters with a skill that is like a real life lottery ticket. It's up to you take advantage of this skill of selling.

An example of how these skills has helped me -when I PCSed from Houston to Fort Knox, there was a very expensive marketing event in Connecticut that I wanted to attend enroute. The event cost $3,000 which I didn't have at the time. In a very short period of time, I was able to sell products and my writing services to raise $3,000 to go to the event.

If you can convince people to join the Army you can convince any market to buy your product and put cash in your pocket and support your family. Selling is a highly-paid skill. You will always have job security if you can sell.

Q.   When you first started recruiting you hated it, how do you feel about recruiting now?
A.   I love recruiting. It's one of those things that people say, if you find something you love and get people to pay you, you will never have to work a day in your life. There is no greater feeling than putting people in the Army. It's a rush.